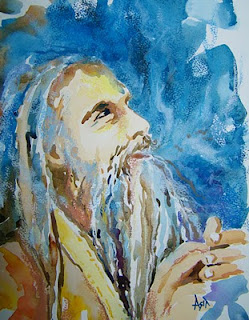 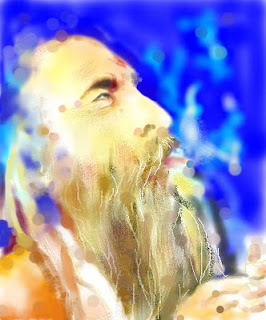 In Hinduism, 'Sadhu' is a term for a mystic or a wandering monk. They are ones who have left behind  materialism and live in forests or temples all over India and Nepal. They are still widely respected for their holiness and also at times feared for their curses. They wear saffron clothes and at times nothing but their own locks of unruly hair! Smoking hash and opium is very common among them. It is considered a means to forget the world and attain nirvana! If you want to know more about them click HERE.
I found a picture of a sadhu in total bliss. Painted it first in watercolor and pastels. This was a quick sketch but some how got over worked. Could not get the fluidity of water color. Was not entirely happy with it. Decided to give it a try digitally also. Both are there in front of you. What do you think?
Posted by AK at 2:40 PM

I am an aviator by profession. But I have always been fascinated and obsessed with colours. Have been dabbling in them whenever I got time. My profession has taken me to places far and wide. Meeting people and seeing new places has been a pleasure. Through this blog I am trying to bring my profession and obsession together. It is a record of my journey with and through colours. I hope you enjoy the visit. Feel free to put in your comments. Thanks.