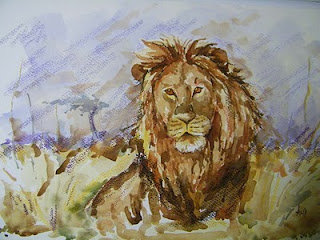 Got a chance to visit the Virunga National Park on the Congo Uganda border. Was hosted by some friends at a small place called Rwindi earlier famous for a lovely forest resort (now in ruins). Could not go empty handed. What better gift than a small watercolor of a Lion......Rwindi is famous for its ferocious lions. These lions are not used to humans like in many parks of the world. I think it was a good omen. We were rewarded by a nocturnal visit by four lionesses. We were surrounded by more than 300 shivering antelopes and the predators at some distance. It was so surprising, the normally shy antelopes, knew very well that as long as they stayed close to humans the lions will not dare attack...and they were correct. After a 45 minutes stand off the lionesses left. Survival of the smartest!!!
Posted by AK at 2:15 PM

I am an aviator by profession. But I have always been fascinated and obsessed with colours. Have been dabbling in them whenever I got time. My profession has taken me to places far and wide. Meeting people and seeing new places has been a pleasure. Through this blog I am trying to bring my profession and obsession together. It is a record of my journey with and through colours. I hope you enjoy the visit. Feel free to put in your comments. Thanks.